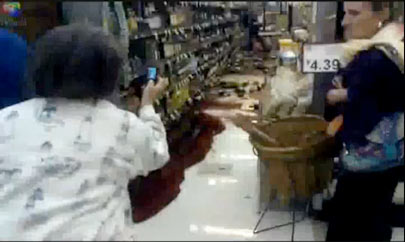 Gotta love how everyone (even little old ladies) can now so easily document the crazy shit that goes on around us. Bless you, good samaritans.

I used to live right across from this grocery store when it used to be a Cala. I saw a lot of stern Russians but never like this.

This is right up there with the guy falling in the aisle. Only angrier. Messier. The woman’s obviously crazy. But at the same time, you know it’d be fun. Read how it all went down at SFist »

So pathetic, it’s impressive. Someone needs to do a Techno Viking remix of this. Pronto. (Thanks, Mel)

Hang in there. Especially if you’ve seen the original vid. This Tragedy Remix Requiem soundtrack is seriously brilliant. I’m sure Jeff Goldblum would attest.

END_OF_DOCUMENT_TOKEN_TO_BE_REPLACED

Jeff Goldblum cracks me up for reasons I don’t understand. Slow him down to a drunken crawl, or stoned stupor, and I am on the floor.