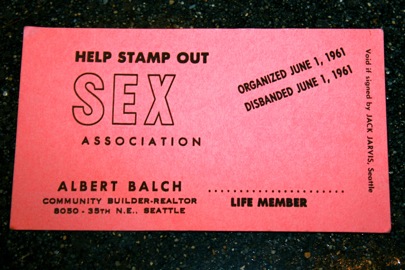 I inherited the Random Hoarding gene from my Dad. And the random things he hoarded. This was in one of his boxes.

The card was made by Jack Jarvis, a writer for the Seattle Post-Intelligencer 1936–72. Apparently, Jack would dream up nonsensical, humorous organizations and then print their business cards in his basement. A real DIY type. Another was a men’s bathroom pass for the Seattle Monorail (bathroom-less) to mess with visitors to the ’62 World’s Fair. That’s right up there with the ol’ elevator pass for high school freshman.