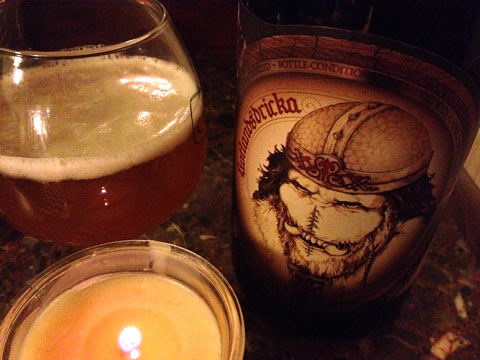 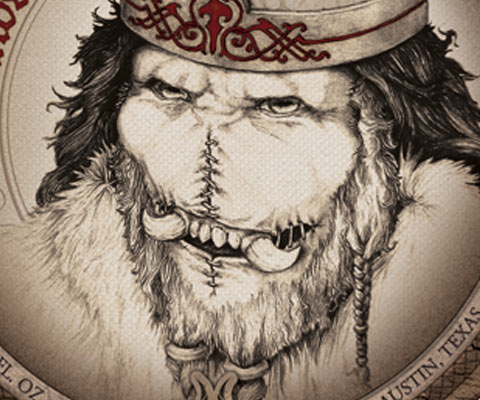 Not without a nice snifter or tulip-shaped glass. It’s got juniper berries in it! 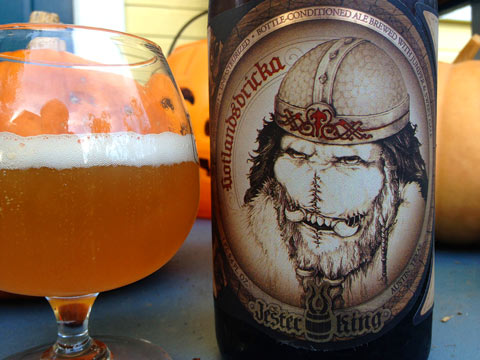 There’s plenty of spookily-themed craft beer labels out there. Some with demons or ghosts. But how many can you say trigger the type of reaction as this Gotlandsdricka art from Jester King? It won’t keep you up at night (or will it?) but it universally gets a “damn” reaction. And that’s pretty damn cool.

The name translates as “Drink of the Good Land” and is based on an ancient Viking farmhouse ale, “brewed with birchwood smoked malt, juniper, sweet gale and rye. It’s unfiltered, unpasteurized and naturally carbonated through re-fermentation in the bottle“.

For as gnarly ‘n badass as the art looks, you expect the beer to be thick and Norse-blood red. Not the hazy straw color it pours. Once you bring it to your nose (something our guy on the label can never ever do) you’ll smell the bad-assedness coming through. There’s a bit of tart funk but mainly there’s the smoky birch and general wild, earthiness. Despite the dark label and fiery smell, the head is pure, snowy white. The taste is crazy. Smokey (not in that liquid-smoke kinda way) with flavors of wild honey, tobacco, leather, pepper and even hints of the herbal-y juniper. For all that, it’s very well-balanced and quite enjoyable.

Who does Jester King’s art?

That’d be their in-house wunderkind, Josh Cockrell. He’s responsible for not only making all their labels unique but distinctly on brand, he also makes each and every one fan-freaking-tastic. As a result several of Jester King‘s labels are in the CRAFT BEERDS book. If only this beer was released a little earlier; it would’ve been included, too. Nice to enjoy for Halloween though. Read more about Gotlandsdricka here.